Warmer Temps May Trigger Severe Weather in Parts of US

The warming temperatures which will prevail over much of the country this week will be a welcomed break from the very harsh winter millions of Americans have thus far endured this season. However, the warmer air is bringing with it a threat of severe thunderstorms to the Southeast, Oho Valley and portions of the Upper Midwest. And, because there is a lot of snow on the ground in many areas being forecast to receive rain, there’s a real possibility that river and stream flooding will occur. Temperatures will be in the 40s this week from the Upper Midwest into New England. 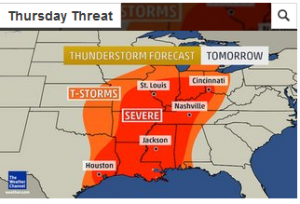 States which could see flooding this week include Ohio, Indiana, Illinois and Michigan so says the National Weather Service. One to two inches of rain may drench parts of the Mississippi and Ohio Valleys Thursday and Friday. It’s also likely that severe thunderstorm activity will move into that part of the country which could bring with it high gusting winds of 50 to 60 miles per hour and hailstones 1 to 2 inches in diameter. The NWS also said that there is a chance of tornadoes developing in the Ohio Valley region and the Southeast this week even though the service does not believe there will be any serious widespread tornado activity.

The rare February thunderstorms that are being predicted this week will be embedded within the line of rain showers moving across the mid portion of the country. The National Weather Service is warning that a “powerful storm” will blast the greater Chicago area late Wednesday through Thursday morning packing thunderstorms, freezing rain, sleet and possibly heavy snow. Temps could reach into the low 50s Thursday in the Windy City before a cold front pushes into the area with damaging winds in excess of 50 miles per hour. Friday’s high in Chicago will be more normal for this time of the year as the mercury level will be right around the freezing mark. The NWS has a flood watch in effect for the greater Chicago from early Wednesday to mid-day Thursday.

There will be blizzard-like conditions in parts of Iowa, Wisconsin and Minnesota Thursday as the unstable weather pattern pushes eastward. The complex winter storm that is heading into the Upper Midwest Thursday could bring with it a real mixed bag of tricks including heavy snowfall, damaging winds, ice, rain and thunder forecasters say. The National Weather Forecast states that the storm is expected to intensify rapidly as it pushes northeast from the central Plains to eastern Lake Superior Wednesday night into Thursday. The NWS also says that ice accumulations are very possible as the precipitation may turn from snow to freezing rain and a sleet mix.